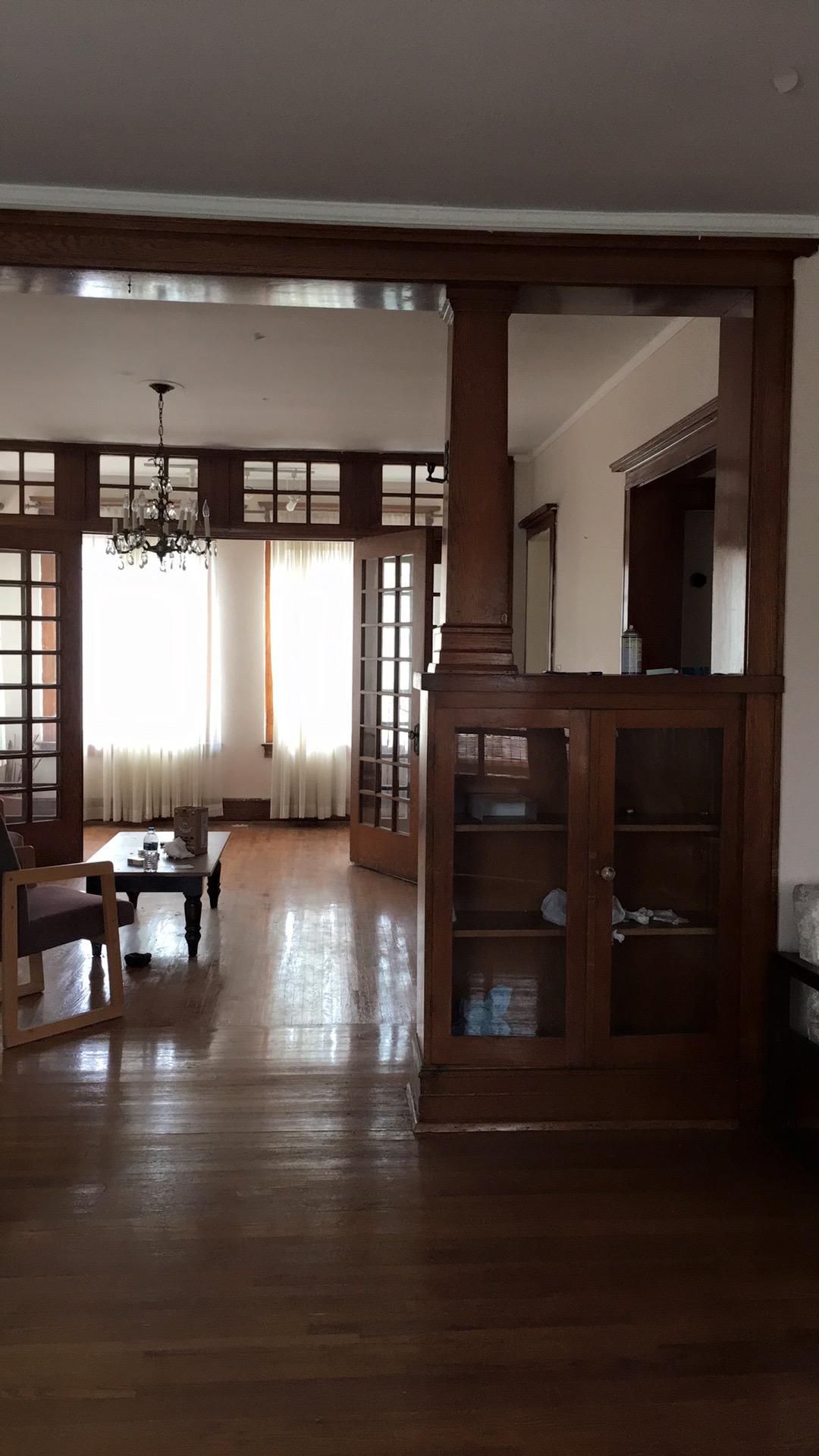 On a freelance photography job, I met a lady who lives on my new block, I mentioned I've been looking for a fixer-upper house for over a year, she said there's one on her block that's been empty for a long time and showed it to me. I took one look, and fell head over heels for it. It wasn't for sale, so we tracked down the owner, saw it inside, and I made an offer. It's been empty for over 8 years, but closed up. At one point it was scrapped, they ripped out the radiators, entire kitchen, how water heater and boiler and all appliances. These things were replaced in a bad way. Violetta is an original 1924 Craftsmen house, I believe the "Fullerton" model, with a lot of the oak woodwork and built-ins still intact, as well as the brick Art Deco fireplace, thankfully never painted. Violetta was never brought up to code regarding plumbing and electrical, so right now I'm working with a wonderful plumber to replace all the broken pipes and fix leaks. She'll get a 100 amp electrical panel next. She's my dream, and I expect to be repairing her for a few years to come. I have no actual budget, just my paycheck, and will be doing as much work as I can myself. .

Update 5-11: Changed the name from Violetta to Frankenstein, as the house is a mismatched patchwork of really bad "renovation". I finally found a contractor not fond of heroin, and we went over the house with a fine tooth comb. Very depressing news. Wiring is original 1924 vintage with much added fuckery resulting in shorts everywhere and no service everywhere else. The owners also just taped up the joints in the leaking pipes, which are all rusted and cracked. In short I bought a shell with black mold as a roommate. Trying to devise a heating scheme for the fall as until we replace both the exposed, frayed electrical service coming into the house and all the pipes, I'll be "living Amish", as it's known here in Detroit. Thankfully it's summer and I'm intrepid. Hey, Mister, loan a girl $40,000? shit. sigh. The good news is I have plenty of storage space for my stuff while we rip plaster walls open.

First priorities are security and basic services. I replaced the missing locks and handles on the front and side doors, and we're replacing pipes in the basement, as most of them are rusted or cracked. They're original to the house, sadly. Cleaned up the yard, clipping overgrown bushes and picked up two contractors bags of trash.

It took: one week

The contractor is re-piping the currently disgusting basement bathroom and the kitchen sink this weekend, as my rental is coming to a close and I have to move in early next week. It'll be nice to have a toilet and not have to pee into a bucket. What a shit show of plumbing blunders we're finding. Pipes missing, pipes leading nowhere or unconnected to each other, mold, rust, rust and more rust. My beautiful plaster walls now have big holes in them on all floors. We also demolished a massive 900 lb cement double utility sink in the basement that was leaking. It had a broken brass faucet that would've been cool had it remained intact. I can live with this going on but I feel sorry for my 3 dogs and 2 cats, who'll be kept in the upstairs bedrooms while I'm at work and the contractor is pounding out walls and pexing. Vexing.

It took: 3 days, not counting replastering the holes in the walls

Well, the last "plumber" has disappeared without finishing, leaving me with constant leaking from an upstairs pipe in the wall, leaking frim the downstairs toilet, no way to connect the washer and dryer, massive holes in my walls, piles of heavy construction garbage in my yard that I can't lift and cut pipes everywhere. No outside water for the garden. Yet he insists I pay him $1200 for "completely repiping the house". Another scam artist, he butchered this place and I can't get the leaks fixed till payday, coming soon. What a prick. He took a maytag washer and dryer and an electric stove away, but left me the demo trash. Not getting another cent. Refused to give a reciept for the $500 cash already paid. Are you a competent, honest plumber? Please, please call me. Getting tired of these clowns.