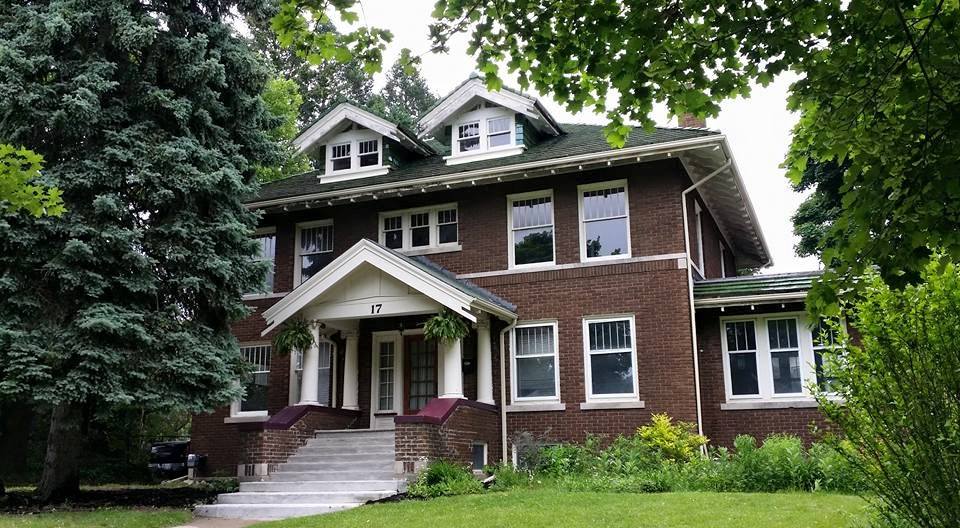 Large house in Seminole Hills Historic District. After a fire, was purchased by an investment company and each room rented out, as a sort of boarding house. Lots of historic work was 'undone', and is currently undergoing renovation to restore. One of the only homes in the historic district with an attached garage, unheard of at the time it was built. Ludowici tile roof in green enamel.

Discovered that any historic replica window put into the house on the 2nd floor after the fire was not seated in the wall properly- they were being held with a few nails. The whole house was drafty as a result, with enormous heating bills. We had to remove, reseat, and reseal/caulk.

Repaired crumbling front steps. The concrete steps had developed holes in them, we cut out any crumbling bits and resurfaced with concrete. Not perfect, but it allowed us to get insurance on the house and made the property safe.

New steam boiler - the old steam boiler stopped working suddenly. Turns out that the company that had installed it 10+ years ago installed the wrong size, did a poor job with plumbing, etc. They also failed to identify that debris was accumulating in the steam boiler during their annual inspection, and thus it burned out. New furnace is significantly smaller. https://www.facebook.com/17ottawa/

Home had experienced a fire long before we purchased and the fire centered in the staircase from the 1st floor to the second. Whoever repaired it before did not use a center support for the stairs, so all the steps had begun to split. The landing between the first floor and second was plywood, and also had not been installed properly. We contracted MSA Construction https://www.facebook.com/msabuilds/

Roof experienced a leak near the flashing in the back dormer and along the fireplace. Had to find a company that was experienced with Ludowici tile. We sourced exact match Ludowici tile (green enameled tile) from a house in the Franklin Historic district in Pontiac, paying them for the tile by replacing their roof with historically approved green shingles. We used Detroit Cornice & Slate in Ferndale for the roof repair, as they were literally the only company that would provide a quote. http://detroitcornice.com/ They used copper flashing and used our reclaimed tile to repair the roof.

Wet plaster repair after roof leak was corrected. The bathroom had been damaged prior to purchase, but had continued to worsen. We used Milo's Plastering in Waterford- they are a husband and wife team, and were incredibly friendly and helpful. https://www.homeadvisor.com/rated.MilosPlaster.16179999.html

Electric repair in the stairway from the 2nd to 3rd floor- the light never worked, and turned out that a wire had been cut somewhere in the wall. They had to run new wire. We used Mr. Electric and they were fast, professional, and very competitive in pricing https://mrelectric.com/macomb

Doors. All of the doors for the house had been taken and kept by the restoration company that was contracted after the fire prior to our purchase. Apparently the owners didn't pay, so they lost the doors. We purchased old doors from Detroit Antique and Props. There is a mix of pine & oak, which hopefully we can stain to match. We also purchased hardware like door hinges, knobs, mortises, etc from the same place nearly a year later, and we're now installing everything. There's a definite learning curve. All in the doors cost under 1k, the hardware cost nearly 1k, and we're buying oak to match the trim. Of note is the fact that we can't find oak boards to match the baseboard trim (it's just too wide) so our workaround is using oak plywood, which matches exceptionally well.

It took: in progress

Roof brackets. We ordered new roof brackets back when we first got the house, we were required to repair the soffit area of the house, replace brackets, and paint before we could get insurance on the house. We used C & A Wood Products for the bracket creation. http://detroitwoodworking.com/candawoodpro/About_Us.html